While there are numerous options regarding which structure to operate, the decision is often determined by the need to protect Intellectual Property and the businesses capital raising requirements.

A vital component of starting your Software-as-a-Service (SaaS) business is in considering what structure you will have. Important considerations when deciding on a structure include Intellectual Property Protection, ensuring you have the capability to raise capital and the desire to limit your personal liability if things go wrong. Furthermore, if there are multiple founders, then you will need to devise how ownership will be apportioned and implement a structure which can facilitate your ownership needs.

The first port of call for many tech-entrepreneurs are government websites, which present a number of options.

They typically set out the 4 most common business structures in Australia, being:

Each of these structures present various costs and benefits, however, rarely is it that simple. Usually what is needed when structuring a SaaS business is a combination of them.

The Sole Trader and Partnership structures are often the first to be eliminated. These structures have the benefit of being cheaper to set up and easier to administer, however, they usually do not provide the capital raising options or protect you adequately from any liabilities that arise.

What we are then left with are Trusts and Companies.

The role of trusts in structuring a SaaS business

While you can operate a Unit Trust similar to a Company the benefits of trusts usually arise from the use of family (discretionary) trusts.

A trust is an obligation imposed on a person or company to hold assets (such as business assets) for the benefit of others, known as beneficiaries. They typically take the form of a Unit Trust or Discretionary (Family Trust)Trust. Where a trust is used to operate a business, it is known as a trading trust.

There are often tax benefits available through effective management of a trust. By way of example capital gains can be passed through a trust to the beneficiaries who can obtain tax discounts. If your plan is to build a Software-as-a-Service business and sell it as a single unit to another individual, a trust may be an option for operating the business, however, this is rarely the case.

A major downside to operating a business as a trust arises from the difficulties in raising capital. It is still possible to raise capital by selling units in a unit trust. However, where you plan to raise venture capital or list on the stock exchange companies are usually a preferable option.

Typically, the use case for trusts when structuring a SaaS business is not as the entity which operates the business, but as the investment vehicle for the owners. Software-as-a-Service businesses can be structured as a company (discussed below) and owners of the business can each hold their shares through a Family Trust. Therefore, when shares of the business are sold, the capital gains arising from the sale can often be passed through to the individual beneficiary and the tax discounts may be available.

Family Trusts can also provide further benefits. Shares in a company usually carry with them rights to a portion of the profits in the form of dividends. By having multiple beneficiaries to a Family Trust, tech-entrepreneurs may be able to distribute a portion of their income from the company to other family members who have a lower marginal tax rate.

If you want to understand more about Family Trusts we recommend N.E. Renton’s Family Trusts A Plain English Guide for Australian Families.

The role of companies when structuring a SaaS business

Software-as-a-Service companies are often structured as a group of companies because of the valuable Intellectual Property they hold.

Companies are the dominant vehicles through which tech-entrepreneurs operate their SaaS business. Companies allow you to raise funds by selling shares to investors, to exit the business via an initial public offering on a stock exchange and a means by which to incentivise employees through employee share options. Furthermore, companies provide a level of protection by separating owners personally from the liability of the operations of the business. The downside of a company is that they are the most heavily regulated business structure. Companies must comply with the Corporations Act 2001 (Cth).

As discussed above, in structuring a SaaS business we will often recommend putting a Family Trust in place. In that case the simplest form for a business structure would look like this: 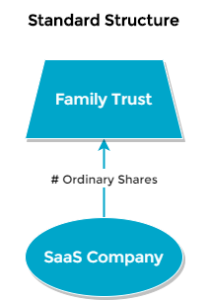 The simple company structure detailed above is a step in the right direction when structuring a SaaS business. However, this structure does not provide a lot of protection to the often-valuable Intellectual Property (IP) that your Software-as-a-Service business holds.

Initially the brand, and therefore the trademark, is not the most valuable asset. The most valuable asset is often in fact the computer code. Whether you have paid a software developer or put your own blood, sweat and tears into coding the program yourself, your code is valuable. The value of your code is best measured by the dollar value of having to recreate it if it was lost, plus the opportunity costs associated with the time to reproduce it. Where this cost is substantial, it is often recommended to separate the trading part of your business (SaaS Trading Company) from the part which holds the IP (SaaS IP Holding Company). This may look like either one of these options: 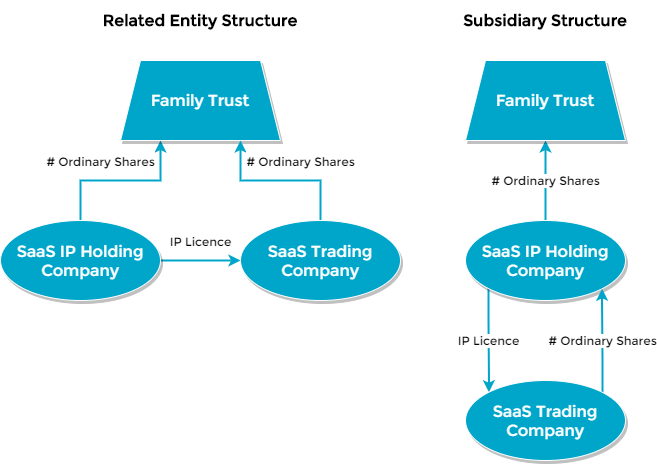 As you can see from the diagram above, in both situations, the SaaS IP Holding Company then gives an IP License to the SaaS Trading Company to use the IP.

So, why are we doing this?

Why do you separate the IP and trading entities in a Software-as-a-Service business?

We already stated the purpose of separating out the Intellectual Property from the trading business is for asset protection purposes, but let’s explore that a little further.

For a broader overview see our article on Intellectual Property Protection. However, for the purposes of our structuring discussion lets focus on why we are separating out the holdings from the operations.

SaaS Trading companies take on risk. No risk, no return. It’s possible that at some point in the future your business ends up in a legal dispute or financial troubles which send the company into insolvency. Where a company becomes insolvent, the assets of the company may be sold to repay creditors. IP assets, such as the code that runs the SaaS application, could therefore be sold.

Owners of companies typically have limited liability; that’s what the “Ltd” part of “Pty Ltd” means. An owner’s liability is typically limited to only the unpaid portion of their share capital, which is often nothing. This applies to owners whether they are individuals, trustee or another company. That limitation is not absolute, however generally, the buck stops with the company itself and the owner’s (or parent company’s) liability is limited. As such, were a SaaS Trading Company to become insolvent, the IP held by the SaaS IP Holding Company would be protected.

If the worse were to happen, the SaaS Trading Company could be wound up and a new one registered. The SaaS IP Holding Company could then go on and assign a new license to and allow your business to begin again.

For this to work, all of the IP needs to be assigned to the SaaS IP Holding Company and an inter-entity IP License drafted. Click here to read more about Intellectual Property Assignment.

It is important to remember that even thriving businesses can run into financial problems. A common problem for fast-growing businesses is cash-flow management; this is why the global unicorns are constantly raising capital even when they are not turning a profit. We’ll leave this problem though for the accountants to explain.

The Related Entity Structure and the Subsidiary Structure still have their challenges. For this reason, we often have a three-company structure for SaaS businesses.

The company structure we highlighted above is not without its problems. These though can be easily resolved by including a third parent company.

The key problem with the Related Entity Structure (exhibited above) is that everything must happen in duplicate. If you decide to sell one company, you end up having to sell two. If you issue shares in one company, you probably have to issue shares in both. Then there is the issue of having multiple shareholders in each company which will lead to you needing multiple Shareholders Agreements.

To solve the flexibility problem with the Subsidiary Structure and the duplication problem with the Related Entity Structure, we will often incorporate a third company which we call the SaaS Parent Company. The SaaS Parent Company then holds 100% of the shares in both the SaaS IP Holding Company and the SaaS Trading Company. The new structure appears as follows:

Structuring a SaaS business with a three-company model like this brings with it the benefits of ease of management, governance and capital raising, the flexibility to sell portions of only the IP or only the trading entities, and provides the desirable intellectual property asset protection.

So, what are the downsides of this structure?

Costs associated with the three-company structure for a SaaS business

The downsides are largely limited to initial set up and ongoing maintenance costs.

From an accounting perspective, your accountant can typically consolidate the group for tax purposes. The bulk of the transactions are only going to occur within the trading company. So, the costs of preparing tax returns and managing the books of a consolidated group are not substantially different to a single company. The downsides to this structure are largely associated with the costs of initially setting up the group.

For each company which is set up there are incorporation costs which are largely fixed and do not incur any volume discounts. There is also a fee payable to ASIC to conduct an annual review. At the time of drafting this article that fee was $273 per company. See the ASIC website for more information.

The other main cost is in drafting the inter-entity IP License between the SaaS IP Holding Company and the SaaS Trading Company. You will need a lawyer to draft one for you.

How to structure a SaaS business with multiple founders or investors?

The structures presented within this article are equally functional where there are multiple tech-entrepreneur founders.

A founder is simply one of the initial investors in a company. So, when we have two tech-entrepreneurs who have founded a SaaS business, the company structure would typically appear as follows:

Knowing how to structure your SaaS business is just the beginning in your journey to launch.

There are a number of legal considerations you should keep in mind when starting a SaaS business. We’ve created some other handy guides including our Guide to SaaS Agreements and Guide to Privacy Policies for SaaS Businesses.

Better yet, why not give us a call for a free initial consultation so we can give you a tailored understanding of your legal needs?

Are you looking for an IT Lawyer that knows tech? Today almost every business is a technology business. Even if you are not on the cutting edge of innovation you are probably entering into business relationships with people who are. If you are not you should be. Helping businesses thrive and reducing transaction costs is at the very heart of any real IT Lawyer.

Need a software development lawyer, with IT, business and accounting qualifications? One who spent over a decade running their own management consulting firm? The sort of commercial lawyer that can translate IT to business, business to law and law back to IT? Contact us today and speak to a multi-disciplinary commercial lawyer.

IT Lawyers are proud to be based in the innovative heart of Brisbane.

Looking for a real IT Lawyer that knows technology?

Contact us today to talk about your next tech venture.